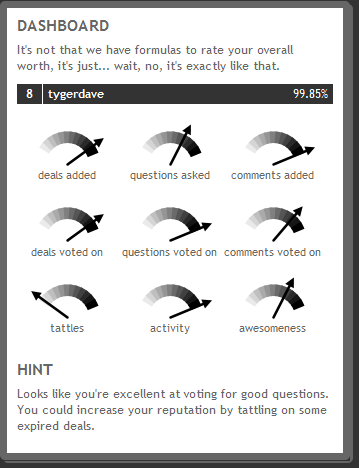 Activity on Woot‘s deal aggregation site Deals.woot.com has exploded over the past week, what lit the fuse?  A new reputation system that is clear, easy to understand, and gives users hints on actions that they can take to increase their reputation.

This was a much needed to boost to traffic and user activity, more than making up for the brutal attack on the site’s most active users a few months ago.   Segregation of the site’s more social area and excessive, at times stalking and shockingly personal, moderation of users caused many of the sites most active users to fade into the shadows or abandon the site altogether.

These changes to the reputation system have been in the works for quite a while, but the deals.woot programming team used the time well and the enhancements have been well received.

The new dashboard is the center-piece of the changes, it details how the users rank in all the categories of activities that earn reputation.   It also provides useful hints that inform users what they can do if they want to increase their reputation.

Some activity is bound to drop off after some of the novelty wears off, but this change has made a real difference in getting the users more involved and has given the site a much needed shot of energy.