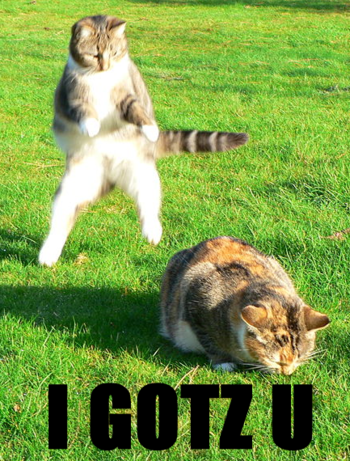 I haz April Foolz lolcats. Intended for use on an April Fool’s page. (Photo credit: Wikipedia)

April Fools Pranks have their roots in small jests from the Middle Ages, but with the power of the internet you can now play an April Fool’s Day Joke on millions! There are a few repeat offenders every year that will be good to keep an eye on and I’ll try to update this post as I come across them. If you see something that isn’t listed, please leave me a comment!

ThinkGeek is my favorite, I love their fake products and I’m not the only one! Several of the fake products they have created for April Fool’s Day have been in such high demand that they’ve actually created them! My favorite this year is the Rosetta Stone – Kilingon:

Google always has a strong showing, it seems that the different departments even compete with each other so keep an eye on all your favorite Google Products:

The Prankster’s at Woot don’t usually need a special day to cause trouble, but that doesn’t mean they won’t take advantage of it. Take a look at their want ad for a new copy editor!

5. LinkedIn is looking for a Punch Card Programmer

6. Fark.com has the front page pointing to stories from a decade ago, and is making me feel old.

7. XKCD has a choose your own adventure up. Should be good, last year’s comic ‘Time’ was epic. UPDATE: Looks like it is as epic as i expected, it’s an Internet wide choose your own adventure/wiki like mash up. The title is Lorenz – named after the American mathematician known for his work describing the ‘Butterfly Effect’ and laying the foundation for Chaos theory. (Source Wikipedia)

I’m sure there will be more, enjoy and be sure leave a comment with your favorite or any that aren’t covered! And while you wait you can always Prepare for April Fool’s 2015!

I’ll be staying up late tonight to watch the beginning of April 1st 2011 and have some fun looking at all the great April Fools Days pranks on the web.

Be on the lookout for updates but I think you can expect something from a few repeat offenders:

Woot.com,  Thinkgeek.com, and even Google.com

It’s been a few years since I’ve covered April Fools Day web pranks but you can check out a few older posts and you can also rank this year’s pranks at aprilfoolsdayontheweb.com

>  Google Romance: “… you’ll live happily, and contextually, ever after.”

>  ThinkGeek’s products are up! – Get an “I, for one, welcome our new computer overlords” shirt with $15 purchase.  My favorite of the bunch – Angry Birds Pork Rinds: 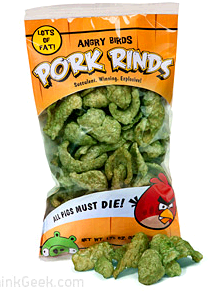 >  All YouTube videos can now be played in 1911 silent mode – about time, the talkies ruined everything!  Maybe not available on all of them though.

>  Looking for some good pranks?  Looks like you can change someone’s Google’s language preference to Elmer Fudd or their Facebook to Pirate-English!  Details@ USAToday.com

> Update 12:47am EST – Time to head over to see what Woot! has coming up at 1am EST!  Usually there is a bag of crap around – read carefully!  Get your credit cards ready!

> Ok So Woot is making you complete game levels as their smart post snail delivering Bags of Crap to earn your April Fools Day bag of crap- I think I grabbed one but the site is acting funky for me so we’ll see.   Avoid the obstacles and shoot the packages with your spacebar, but only shoot into the houses wondering where their BOC has gotten off to!

- Looks like they are trying to fix the funky, as an FYI you the BoC are broken into segments, one allotment per game level.  Looks like I got off easy and snagged a level 1 Crap, keep playing and level up to get the higher level craps… and let me just say HAHA that snail is sloooooowwww :-p

-And it’s back – you’ll need flash to play if you are having problems make sure you are up to date and flash is not blocked!

- Get your Crap?  Brag about it over in the Deals.Woot Community Section ( I’m Tygerdave – say hello!)

I know what you came here for, you went to ThinkGeek.com

And you want to know what it means, you want it decrypted and according to my post title you think I’ve got the answer…

*UPDATE: Thanks to Knetwork Reader Frank for posting the needed cypher (ROT13). The text BUJUNGNSBBYVNZ decrypts to OHWHATAFOOLIAM or Oh What A Fool I Am. And as an extra bonus I’m not going to kill you now that I told you!

Happy April Fool’s Day! I’ll tell you what I would suggest, order yourself $20 worth of goods, get the shirt free, and maybe they will give you the decryption key. Of course it’s entirely possible that the shirt doesn’t decrypt to anything or that if someome tells you what it means, they’d kill you. If you’re going to order something I suggest that you pick up a USB Rocket Launcher

April Fool’s Day pranks know no bounds and you’ll find them all over the web today, here are some of my favorite from the sites I regularly visit.  I’ll try to update as I come across more today.

Always one of my favorite sites, the top banner advertises Wii Sports for the iPhone and it only gets better from there…

Google: The search giant gets in on the fun too…

Woot: For April Fools Day, Woot has Woot-Off featuring the same product over and over and over! Click the pictures from the posts to see the power pack on vacation!

If that’s not enough for you then make sure to check out AprilFoolsDayOnTheWeb.com