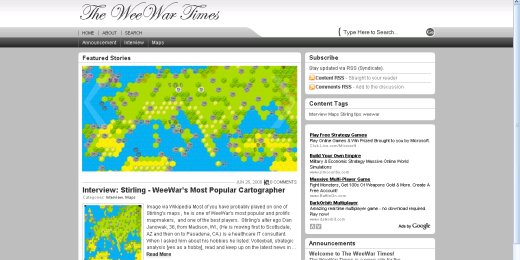 The Knight Knetwork is pleased to announce the newest site in the Knetwork – The WeeWar Times!  If you aren’t familiar with WeeWar, it’s a turn-based strategy game you play from your browser.  WeeWar is an amazing site and is one of the most innovative games around when it comes to giving players control.  A useful API, attentive developers, and an addictive game have created a vibrant community.  The WeeWar Times was launched as a news site to serve that community and will provide an outlet for News, Tips, Interviews, and Map Reviews.

I have to confess that I’m mildy addicted to WeeWar, the free online multiplayer strategy game (think turn based Command and Conquer). The site is recently out of beta and has already built an impressive userbase of over 30,000 registered users. It’s fun, addictive, and with turn time limit’s from 5 minutes all the way up to 3 days, it doesn’t require you to sit at your computer for long periods of time just to play a game. If you are an aspiring WeeWarLord then I’ve put together a few notes that can help get you on on your way: (if you’d like to share this with someone just starting out, I’ve redirected WeeWar.KnightKnetwork.com to this post to make it easier)

Before you play a game:

After you play a few rounds:

It’s been a while since I’ve been involved in any Massively Multiplayer Online Games. When I was involved it was amazing to see how friendships could spring up and how people could come together to support each other and all pitch in to have a good time and build something together. It was also amazing to see how it could all fall apart, sometimes in what seemed like an instant, and other times gradually over time as people lost interest in the group’s goal and each other. There was, and I have to assume still is, a TON of drama that goes on in any guild and I always assumed that any gathering of a group not really known for it’s social skill set was doomed to eventual failure. While that may be the case there is a lot of interesting information out about group dynamics and social group limits and optimal sizes. I was really doing research for an article on Facebook and other social networking applications, but it turns out the MMO games have really proved to be THE rich data source for social theorists.

Since this information has been gathered from these games it seems only fitting that it be pumped back into the system, leaders of groups and guilds should be able to utilize this information in-game, add to it some more conventional and generic social skills and leaders can keep their player groups happier and more efficient, and in my experience that makes it more fun as well! I’m not an expert and won’t pretend to be so if you are interested I suggest you read up: